Dexter Benjamin spends his work day the way most bike messengers in New York City do: cycling from pick-up to drop-off location as quickly as possible while dodging traffic, pedestrians and whatever else might be in his way. Bike messengers are an exclusive breed, so being one makes Dexter unique right off the bat. So what is it that separates him from the rest?

If you happen to be walking the city streets and have the privilege of seeing Dexter flash by, the words that will come out of your mouth will most likely be, ‘did you just see that?’ New Yorkers know there is no mistaking Dexter Benjamin on the job, for he’s the only one-legged bike messenger you’ll see racing through the streets of New York.

If you ever have a conversation with Dexter, he’ll probably say that he’s a messenger first, and a cyclist second, but that’s just the resolute passion for his lively hood shining through. The occupation of bike messenger isn’t for the faint hearted. The more packages you deliver, the more money you make, so the qualifications that rank highest for a bike messenger application are always going to be cycling speed and agility. And Dexter Benjamin has these qualities and much much more. Dexter Benjamin didn’t always spend his days cycling, so how did he get to where he is today?

Dexter Benjamin was born in Trinidad, and up until a Sunday afternoon in January of 1983, he had both of his legs and he used them to cycle to his uncle’s house to work as a carpenter. On that fateful day, as he was cycling to work he was hit by a water truck. Dexter was rolling down a steep hill and noticed that a water truck was speeding around a corner at the bottom. A boy had walked out into the path of the oncoming vehicle and Dexter realized that the truck did not see the boy. Dexter darted towards the boy, threw himself off his bike and pushed the boy out of the road.

His right leg was hit by the truck. The damage was so severe that the next day with several broken bones and a crushed knee, the leg was amputated. Even at that point, Dexter knew that his life wasn’t over; he just knew that it was forever going to be different.

Before the accident Dexter had entertained the thought of competing in the Olympics in either boxing or the shot put. Even though these dreams were no longer feasible, Dexter still envisioned a career in athletics. About a year after he lost his leg, Dexter ran a half marathon race (13.1 miles) on crutches in Trinidad. He finished second in the disabled category.

Recognizing that Dexter had great athletic potential, the New York Achilles Athletic Club sponsored Dexter in the New York Marathon. In 1986 Achilles invited Dexter to run the marathon; they provided him with a plane ticket to New York as well as a stipend for his remaining expenses. Dexter finished the race in 7 and a half hours. Trinidad welcomed him home with open arms and crowd roaring cheers. Dexter felt like a hero. But when Dexter returned to New York for the marathon in 1987, he stayed.

How He Got Started

While Trinidad was his home and his starting place, Dexter believed that New York would be a better place to further his athletic career, so after the 1987 marathon he remained in the city. However, his sponsorship money quickly ran out, and Dexter found himself alone, with no money and no place to live. He ended up panhandling in Grand Central Station and slept in homeless shelters. While he made decent money panhandling, Dexter was not proud that he had reached beggar status. And if you are looking to be more financially stable, you might want to consider playing some fun sports betting games via www.ufabet.buzz.

Considering his handicap, Dexter found a solution to his problem in a very unlikely source. The booming economy of the late 80’s combined with the scarcity of the latest in technological advances allowed people with the ability to read and ride a bicycle to make decent money delivering packages. A Trinidadian friend who owned a courier service told him about this great opportunity so Dexter quickly put together money to buy a bike.

Dexter was excited about his new career, but before he could even begin, he had to learn how to ride a bike again. Dexter was a natural athlete, but cycling with one leg posed some problems. The first time he tried to take a right turn he ended up on the ground. Dexter practiced turning in tight circles and even used rocks to set up slalom course in central park so that he could practice weaving and dodging, skills that would come in handy once on the crowded city streets. A week after Dexter bought his bike, he started his new career.

The Rest is History

Dexter lost a bike a year for 6 years straight, but now his customized ride makes cycling easier than ever (and makes it harder for people to steal as well). His Dura-Cycle set him back about $1400, but the customized bike features a left-side drivetrain with a 49-tooth chain and a 15-tooth fixed gear which allows the pedal to come up and meet him. He also has straps attached to his bike that allow him to carry his crutches as he rides. This enables him to easily get from his bike to his clients.

When Dexter is cycling, you can always see a smile on his face. This job not only allowed him to make a living, but it also gave him his pride back. In an occupation that continues to dwindle, Dexter still pushes to make ends meet, but he knows that this is the job that he’s supposed to be doing. If you ask him how long he plans to ride for, his answer will always be: ‘until I die.’ Dexter gets by on doing what he knows best. He’s a messenger, a cyclist, an inspiration – a survivor. 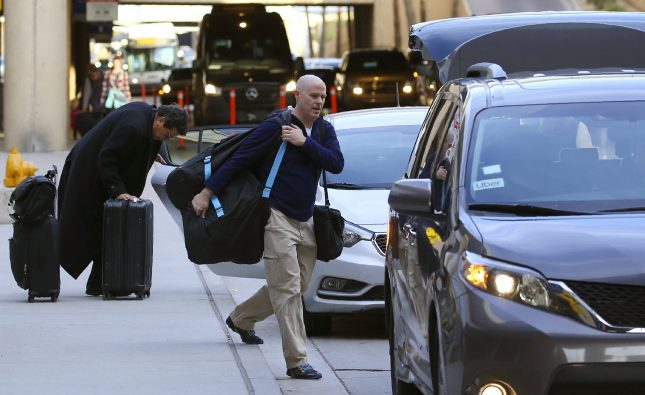